The jewel in the Bay of Naples crown, five-star resort and homeport Marina di Stabia offers all the amenities of a specialist superyacht development with the charm of Southern Italy on its doorstep.

Having been developed by one of the market leaders in luxury yacht marina creation, Marina di Stabia is a modern and convenient place to base your superyacht. As well as being a strategic location for charter, it also offers the comfortable amenities and modern infrastructure you would expect of an outstanding superyacht marina.

Unlike the crowded coastlines and more built-up regions to the north, the year-round warmer climate and economical berthing costs of Marina di Stabia make it an attractive option for a superyacht’s homeport. Within the marina’s superyacht-dedicated quays, there is a minimum water depth of 6m, with berths for yachts of up to 100m.

With its dramatic backdrop of Mount Vesuvius, Marina di Stabia is just a short trip away from popular yachting spots such as the islands of Ischia and Capri, and the quaint coastal towns of Positano, Amalfi, Sorrento and Ravello. The jewel-hued waters and unspoiled, rugged landscape are popular with superyacht owners and charterers looking to avoid more crowded waters elsewhere in the Mediterranean.

Basing a charter yacht in Marina di Stabia places it at a central point between the Eastern and Western Mediterranean cruising grounds. It is just a few days’ travel from Sardinia, Corsica and the French and Italian Rivieras in one direction and Greece, Croatia and Montenegro in the other direction.

Located in Castellammare di Stabia, Naples’ international airport is 25 minutes’ drive from the marina, with international connections for commercial airlines as well as a private jet FBO.

The Marina di Stabia Resort facilities and amenities for guests include the comfortable Yacht Club, Michelin-starred restaurants, waterfront gym and swimming pool, as well as a garden and crew areas for barbecues and the Captains Corner Bar.

An abundance of attractions are within a short drive of the marina, including the ancient historical site of Pompei’s ruins just a few kilometres away, the winding streets of local fishing villages such as Sorrento and Positano, and 10 Michelin-starred restaurants, all within 10km of each other along the coastline.

There is 24/7 security onsite at the marina, which is only accessible to berth holders, yacht guests, crew and members of the Yacht Club. Yachts within the marina have access to broadband wireless internet as well as fuel bunkering and pump-out of black water, grey water and HVAC, generator and engine water discharge.

Plans have been approved for a modern waterfront development adjacent to the marina, including residential homes, hotels, restaurants and luxury shopping opportunities, making an investment in a berth at Marina di Stabia even more attractive. 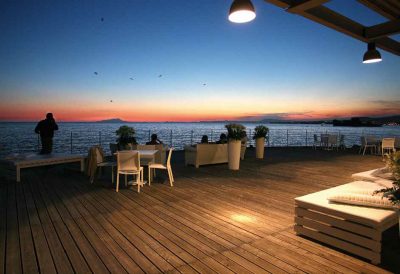 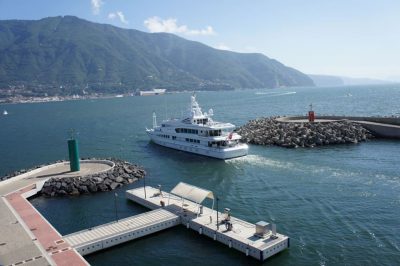