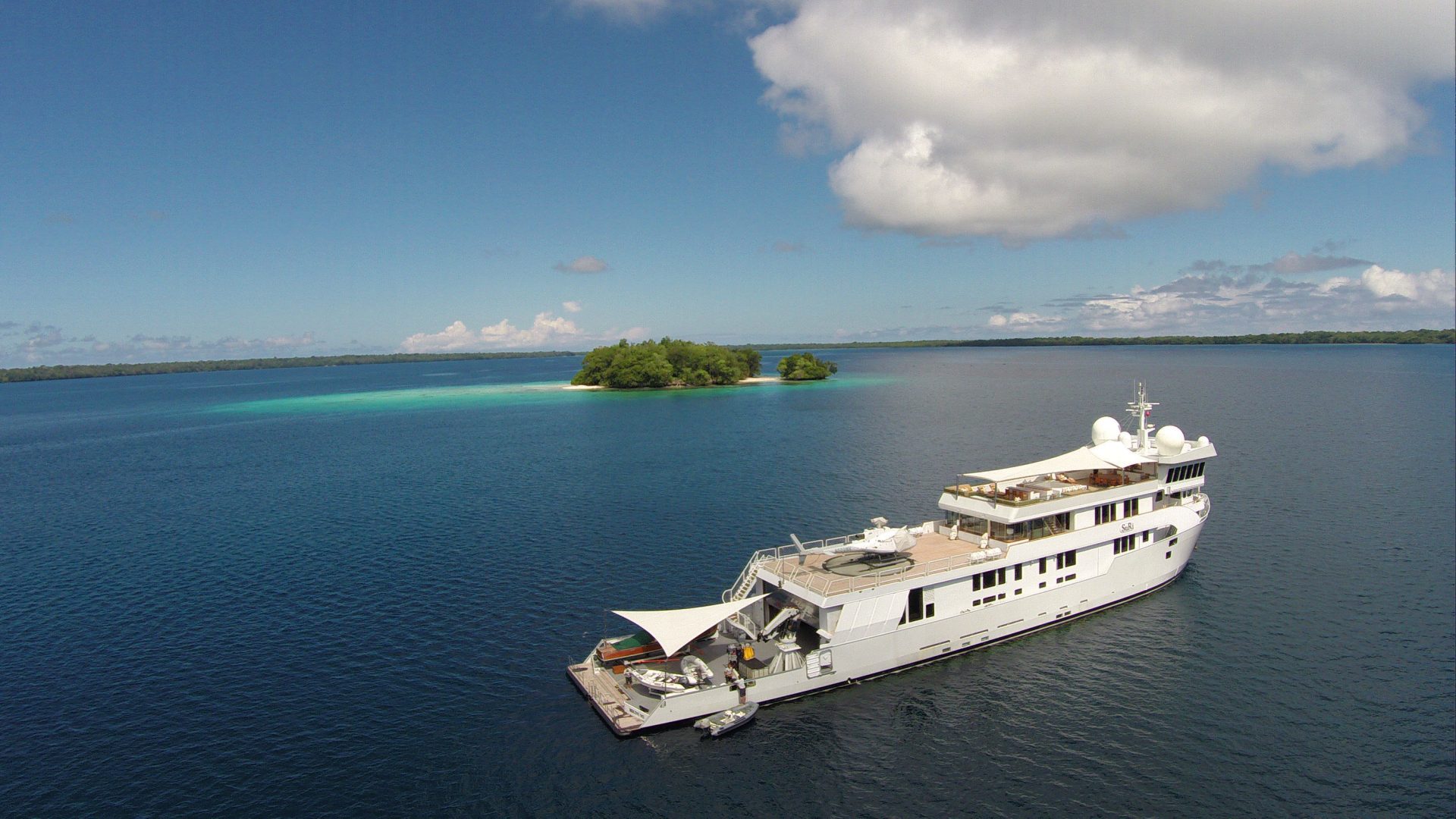 Boat International – On Board with Ric Kayne

We were excited to hear that in the October 2019 edition of Boat International, Mr Kayne – the owner of motor yacht SuRi – was interviewed by Jim Raycroft to get his take on the acclaimed adventure yacht. The following interview has been taken from Boat International’s article – read on to learn more.

If you want to interview Ric Kayne, owner of 63.4-metre expedition yacht SuRi, you have to catch him first – and he doesn’t sit still for long. I manage to finally corner the 74-year-old near Savusavu in Fiji, where he and his wife Suzanne have just celebrated their wedding anniversary. But as soon as I land on the yacht by helicopter, he’s immediately whisked off in his 11-metre Intrepid to explore a new diving spot. The man is a moving target – agile, active and in great shape. Once his morning satellite Wi-Fi routine is over, he gets busy cramming as much fun into each day as possible. He is still active as co-chairman of private investment firm Kayne Anderson Capital Advisors and for the past seven years or so has been making headlines in New Zealand for developing the internationally recognised Tara Iti Golf Club.

Kayne grew up on Long Island, New York, in a family that believed in the value of a good education and hard work. He was a natural with numbers, and statistics seemed a good fit. Following Stanford, he earned an MBA from UCLA Anderson School of Management. After working as an analyst in New York, he returned to Los Angeles where he was a stockbroker until 1984, when he started Kayne Anderson Capital Advisors with the late John Anderson.

“We are one of the oldest of what we call alternative investment firms – alternative in the sense that we don’t really invest in a mainstream kind of way. The firm was really started as a way to manage our own money, and money for people who were comfortable with the way we did it.”

“Today, we manage about $30 billion [£25bn] or so. We have about 300-and-something people around the US. I’m very, very proud of it. I have an approach to management that really is what I would call ‘empowerment’ in the sense that I’m not a micro-manager – I’m not sitting on top of people. I try to hire people who are worthy of having ownership and so I think what you would find on SuRi, for example, is that the captain basically owns the boat.” Kayne has long been a keen golfer and an avid amateur pilot but didn’t catch the boat bug until about 20 years ago. What got him into it was family. The Kaynes’ three daughters were becoming teenagers and were busy doing what most teenagers do – distancing themselves from their parents. 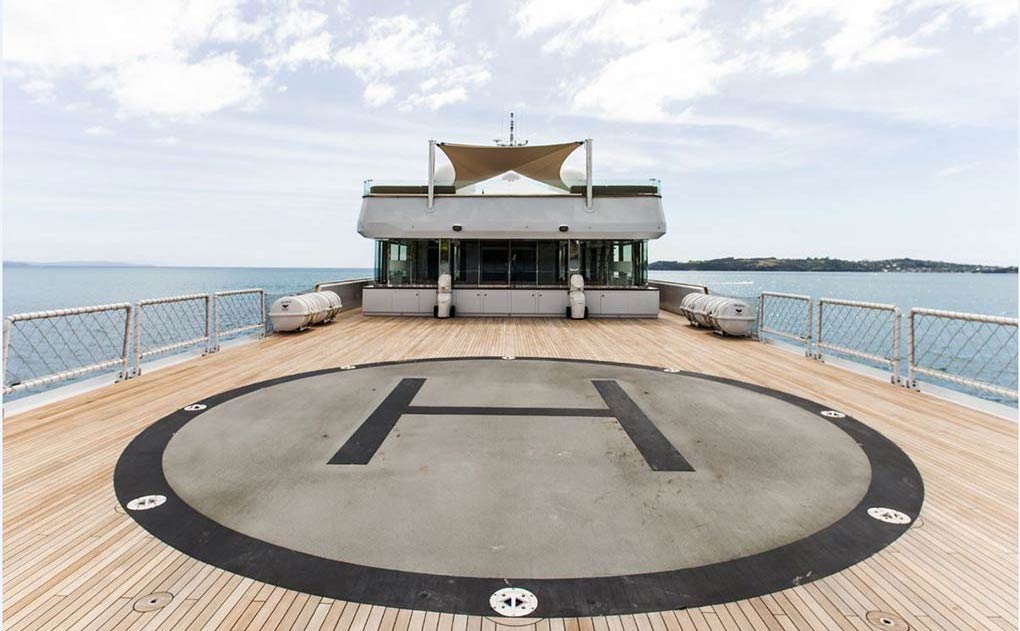 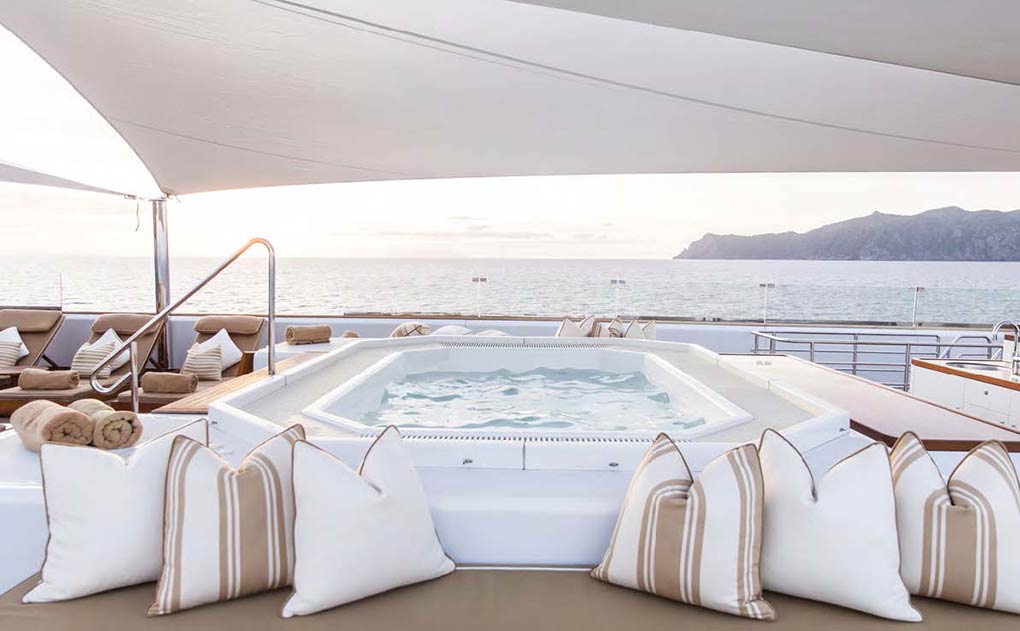 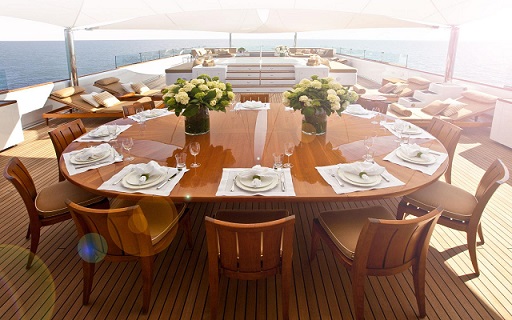 The first meaningful boating experience came around 2002 when he chartered the 37.8-metre Delta Scott Free out of St Martin. “I knew we were on to something,” he says. “We followed up on that first trip and chartered five or six more times, off the Turkish coast, the Amalfi coast, in the Caribbean a couple of times and Costa Rica. The family loved the yacht experience; all the trips were wonderful.” The experiences got him thinking about building his own boat. He delved into research, spending time aboard superyachts with various capabilities, talking to captains and generally gathering as much information as possible. All of that work led to JeMaSa, a 50-metre yacht capable of handling his Eurocopter and a fleet of tenders and toys, all hidden away, built by Hakvoort. Launched in 2006, JeMaSa was named after the Kaynes’ three daughters, Jenni, Maggie and Saree. The first trips were to the Med and then to the Caribbean. “After that we spent very little time on the charter milk runs.” The yacht took the Kayne family around the world, leaving the glitzy Côte d’Azur behind to explore the fjords of Norway, Alaska and far-flung destinations in the South Pacific. “It was the adventure of doing rather than seeing and being seen that attracted me to yachting,” he says.

It wasn’t long before the toy box was overflowing. “I’m a toy guy, I love toys. My curiosity compels me,” he says. “It also became apparent that keeping the helicopter outside on the touch-and-go helipad was not the right way to do it.”
Kayne became intrigued by the idea of a capable craft able to carry all the kit he wanted without encroaching on deck or interior spaces. Soon the search began for an offshore supply boat with enough room for a massive garage to keep the helicopter and the ever-growing collection of toys out of the weather and follow JeMaSa around. A 52-metre crabber that had worked the Aleutians as Fierce Contender in the television series Deadliest Catch looked as if it would work as long as they could figure out how to create space for all the toys.

“Designing the garage was a challenge,” Kayne says. “In addition to the helicopter we had a hovercraft, one of the world’s noisiest boats, a hand-built mahogany speedboat, a work boat, WaveRunners, Sea-Doos, sailboats, ski and wakesurfing boats and, eventually, an amphibious airplane.” 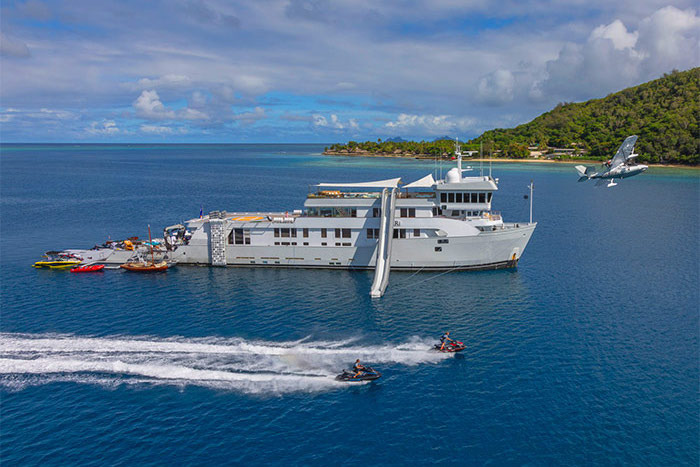 Kayne, who has been flying since he was 16, was determined to get an aircraft aboard. When he could not find any other way to make it happen, he supported the research and development of a folding wing system patented by amphibious aircraft company SeaRey. Naturally he became its first customer, and the system is now available as an option on SeaRey’s Elite model.

The conversion of Fierce Contender to shadow yacht was completed in Seattle over the winter of 2007 and the renamed SuRi joined JeMaSa for the first time in Denarau, Fiji. A photograph on the wall of SuRi’s saloon shows the two boats tied up stern to stern. Kayne calls it his “hundred-metre articulated yacht”. However, the two boats were rarely together. After a local boat T-boned JeMaSa in the Galápagos and the yacht had to spend several months in a New Zealand yard for repairs, SuRi picked up the slack. And that, Kayne says, was the tipping point. “Our family was growing and neither yacht was adequate for carrying all the people and all the toys,” he says. “By this time, I knew exactly what we wanted, so I did another silly thing – I decided to sell JeMaSa and jumbo-size SuRi.”

In 2011, SuRi arrived in Alameda, California for another major refit. This time, Bay Ship and Yacht cut the boat in half and added a 10.7-metre mid-section that brought her length to 63.4 metres. The extra length added guest cabins, pilot and security cabins, a lounge with two large “windows to the sea” cut into the hull, a larger sundeck, helideck and what is arguably the largest toy garage-cum-aircraft hangar afloat outside the US Navy.
Kayne immediately went to work filling his new hangar with even more toys and SuRi became the ultimate fun factory. The most recent addition is a crane capable of handling a serious multi-passenger submarine. “My mother absolutely delighted in showing people experiences that they might not have had on their own. For us to take family and friends on this boat has been that kind of a situation,” says Kayne, now a grandfather who enjoys seeing his grandchildren interact with marine life, and the smiles on the faces of his guests.

Because they keep themselves so busy, the Kaynes don’t spend more than a few weeks a year on the boat, so decided to kick SuRi’s charter programme into high gear. Kayne describes the boat fondly as “sort of an ugly duckling” but one that can deliver what people value most – experiences. The low-key decor focuses on comfort as opposed to glamour, but the food and service rival those of the world’s glitziest superyachts.

“Whatever it is that you want to do – put jet boots on your feet and go flying up in the air, go kitesurfing, take a cruise in a Riva type of boat, or go wakeboarding, wake surfing, waterskiing, fishing or diving, you just go and do it.”

He still enjoys spending time on SuRi but, he says, he is almost done with tweaking the boat. What excites Kayne these days is his golf project. Seven years ago, he bought an oceanfront property between Auckland and Whangarei on New Zealand’s North Island and set out to develop an American-style golf club. Tara Iti has now been open for three years and is ranked among the top golf courses in the world. He calls the club a “land-based superyacht” for its
top-notch location and service. Getting the project started was not easy and there was some pushback, but in the process he’s fallen in love with the country, its people and culture. “New Zealand is a treasure,” he says.
Recently, he filed an application with New Zealand’s Overseas Investment Office to expand further with the goal of making it a world-class golf destination.

“If we are fortunate enough to get the approval, we’re going to build what we believe will cause more people to come and visit,” he says. “In the US we have the Monterey coast, where you have Pebble Beach, Lone Cypress and Spyglass. There are a couple of real Meccas of golf in the world and that’s one of them. We’ve got a chance to do the same thing in the Southern Hemisphere and that’s what we are hoping to do,” he says. “It’s probably not something that any sane person would do, so I’m doing it.” And with that, he is off to the next thing on his to-do list.