Beach life in the Balearics

From hidden away to hedonistic

Over the summer, the Balearics draw yachts like bees to honey, not surprisingly as this cluster of five islands to the east of Spain’s mainland has more than 1,700km of shoreline between them. Thanks to a long summer season of warm weather, there is plenty of time to explore the islands’ hidden treasures on yacht charters in Spain, including some of the most appealing beaches in the Mediterranean.

Ibiza, also known as Eivissa and the White Isle, has some of the most enchanting beach offerings around, with something for every taste and age group embarking on yacht charters in the Balearics. Cruise to the far south-west of the island to visit Cala d’Hort beach, which has the best views of the iconic Es Vedrà rock. The limestone rock formation is thought by many to be the third most magnetic place on Earth. If all that magnetism gives you an appetite, there are some particularly popular clifftop restaurants nearby that serve superb seafood.

Many clients choosing Ibiza as a charter destination do so because of its reputation for having the liveliest beach life in the Balearics. Few family summer charters would not be complete without a trip to one of Ibiza’s iconic beach clubs. These clubs draw an international crowd that is looking to extend their long lunches well into the evening and beyond with top-billing DJs, live music and freely flowing bubbles.

Those with a preference for serenity over hedonism might want to head to the Instagram-worthy sunset spot at Punta Galera, translated as “flat rocks”. This iconic site is popular with a local crowd thanks to its spiritual ambiance, out-of-this-world sunset vistas and daytime cliff-jumping (whether you are a spectator or want to take a leap yourself). The vertiginous cliffs form an equally magnificent backdrop from a yacht or a place from which to watch the changing sky. With many spectators inspired to salute the sun’s decent from their yoga mats, there’s a definite ‘Om’ in the air at Punta Galera. 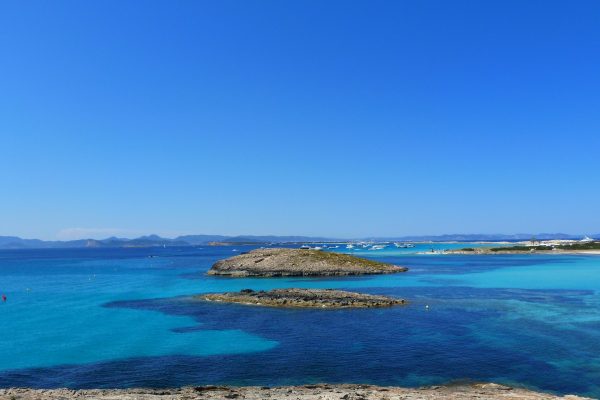 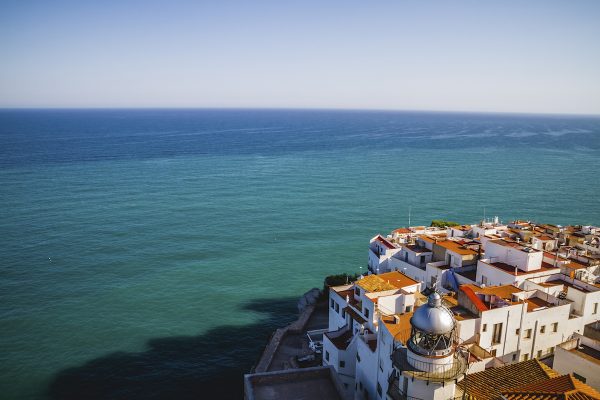 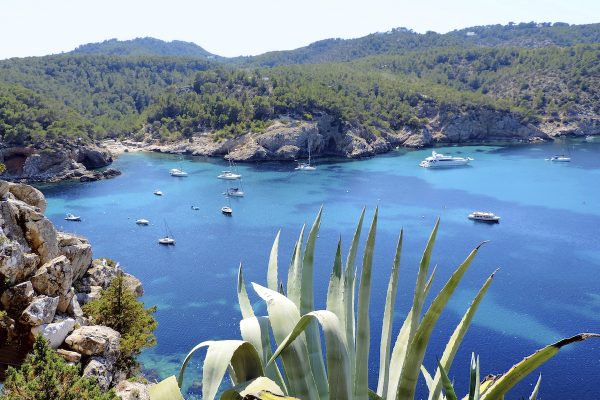 Formentera is somewhat of an under-the-radar favourite for Balearic veterans, especially those visiting the archipelago on yacht charters in Spain. Known as the chilled-out little sister of Ibiza, being smaller and less frequented by the masses, its beaches are straight out of a Caribbean pirate film. Think long, empty stretches of pinkish-hued sand, bright aquamarine water and cobalt skies.

The island found notoriety in the 70s when visits from Pink Floyd and Bob Dylan put it on the map. The most spectacular beaches in Formentera are considered to be Migjorn, Illetes and Llevant, and well worth a visit. The island has a bohemian and peaceful vibe, with beachside boutique hotels frequented by the likes of supermodels and rock stars.

Menorca has not traditionally played host to large numbers of yachts, but this is changing for those chartering a yacht in the Balearic Islands who are looking for a little more tranquillity. Take an early tender ride to the rocky bay of Caló Blanc for some great snorkelling by the cliffs, while the braver members of your group might want to have a go at cliff jumping. The marine park at Cala Pregonda has some great snorkelling for all the family in the sheltered bays. Hike the coastal path at Cala del Pilar and you will be rewarded with stunning views of terracotta earth, rugged landscapes and gemstone-hued waters.

If you opt for one of the specific yacht charters in Spain that takes in Mallorca, be sure to head to Deià on the northern coast of the island. This hidden pocket of the island is best approached by yacht, thanks to the stunning cliff-face views that welcome you. The village of Deià is a UNESCO World Heritage Site, with an interesting mix of understated chic meets artistic island cool. Some of the village’s restaurants are perched right on the rocky waterfront, with great views of the cliff-diving locals and visitors. Head over in early evening to catch the last of the somersaults while enjoying a sundowner in one of these popular local seafood restaurants.

Those who enjoy some water sports of their own can jump in the yacht’s tender to Llucalcari where some fantastic cave diving awaits. Alternatively, the area near Mallorca’s Port Andratx has several hidden beaches away from the crowds that offer a great opportunity for a private picnic ashore. And for a break from the beach life, the island’s capital, Palma de Mallorca, is known for its upscale shopping, spectacular gothic cathedral and excellent selection of gourmet restaurants.